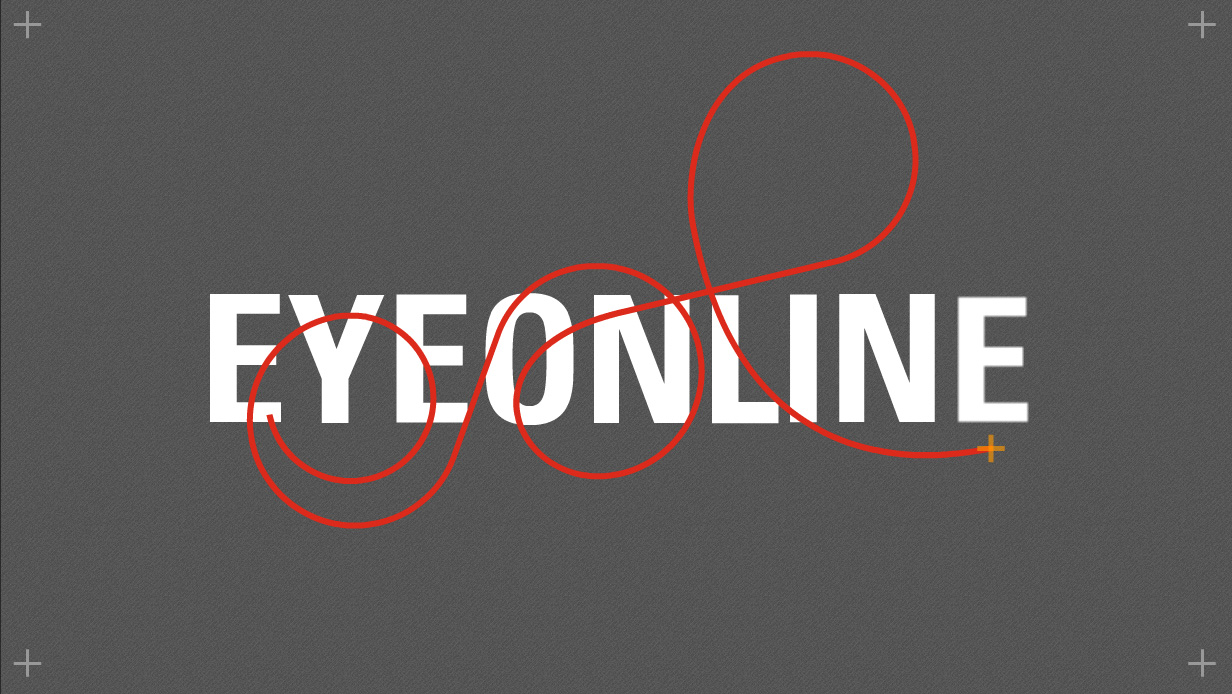 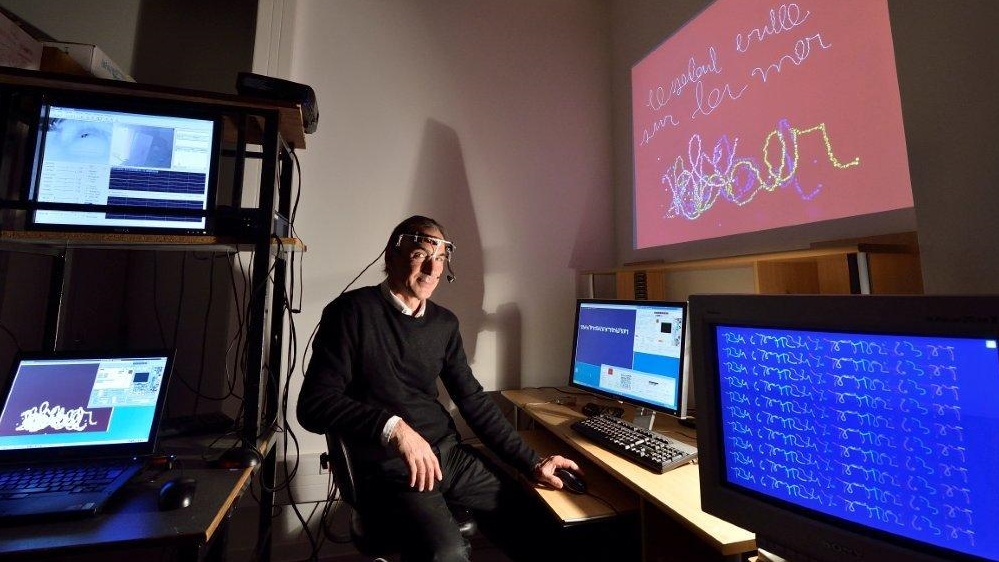 To understand how Eye-Writing works, one should first know that smooth pursuit eye-movements are used to maintain the image of a moving object on the fovea, at the center of the eyes, as when tracking a bird flying in the sky. This is easy to do  when there is something to track (altough some individuals are not very good at it), but it is impossible when there is no moving target at all. In that case, only saccades (very fast discrete movements of the eyes) are produced, even though one may believe that one generates smooth pursuit. So using smooth pursuit requires that there is something to track ! But the problem is that if a predetermined visual motion is displayed on a screen, how then choose a direction to write or draw at will !

A solution is to track an illusory motion, itself generated by one’s eye movements. The idea is that moving your eyes should elicit an illusory motion in the same direction as your eyes. In that case, you can start surfing (tracking) that moving illusion, as you would do on an ocean wave, to progressively master surfing. You then need to learn to project the motor plan you use for hand-writing on your eye-muscles.

OK, so far, so good. But what kind of visual stimulus would produce such an illusion? Well, it turns out that the cerebral neurons specialized in motion analysis can be fooled just by changing the contrast polarity of the moving stimulus at some temporal rate (black/white/black/white etc.. around 10 Hz, ). Why it this so? This would require a long explanation, but let’s say that these neurons perform specific neural computations needed to extract visual motion from their inputs (coming from the retina through some relays), and the way they do this calculation is such that the response of the neurons is inverted when they face contrast polarity changes. As a consequence the perceived direction of motion also changes, as Stuart Anstis elegantly showed in the 70’s, using images of a movie that alternate between positive and negative contrast polarity (See Anstis’ movie example on the right, where a global  anticlockwie motion is first seen, but if you pay attention to one moving element, you’ll see that the motion is in fact clockwise!  Have a look to Anstis’s website http://anstislab.ucsd.edu/)

I found that a stimulus made of static dots, but flickering, elicits an illusion of motion when one moves the head or the eyes. This illusion can then be used as a visual substrate to write with the eyes. The images on the right show  examples of the vertical and horizontal eye-traces over time when writing digits or words.

Unfortunately, to start to draw or write with the eyes and see the result written on a screen, you need an eye-tracker : a device that records eye-movements! If you had one, you could record your eye-movements, check that they are smooth and you could try to project the hand-writing of yours onto your eye-muscles.

The figures on the right show examples of writings and drawings; the bottom figure shows the movement of the eyes along the horizontal (red traces) and vertical (blue traces), as well as the speed of the eyes, with each word or digits separated by a blink (short vertical lines). As one can see, the eye-movements are smooth and the speed within the rage of smooth-pursuit eye movements.

A full description of EOL, will photographs, illustrations and training displays is  available at : 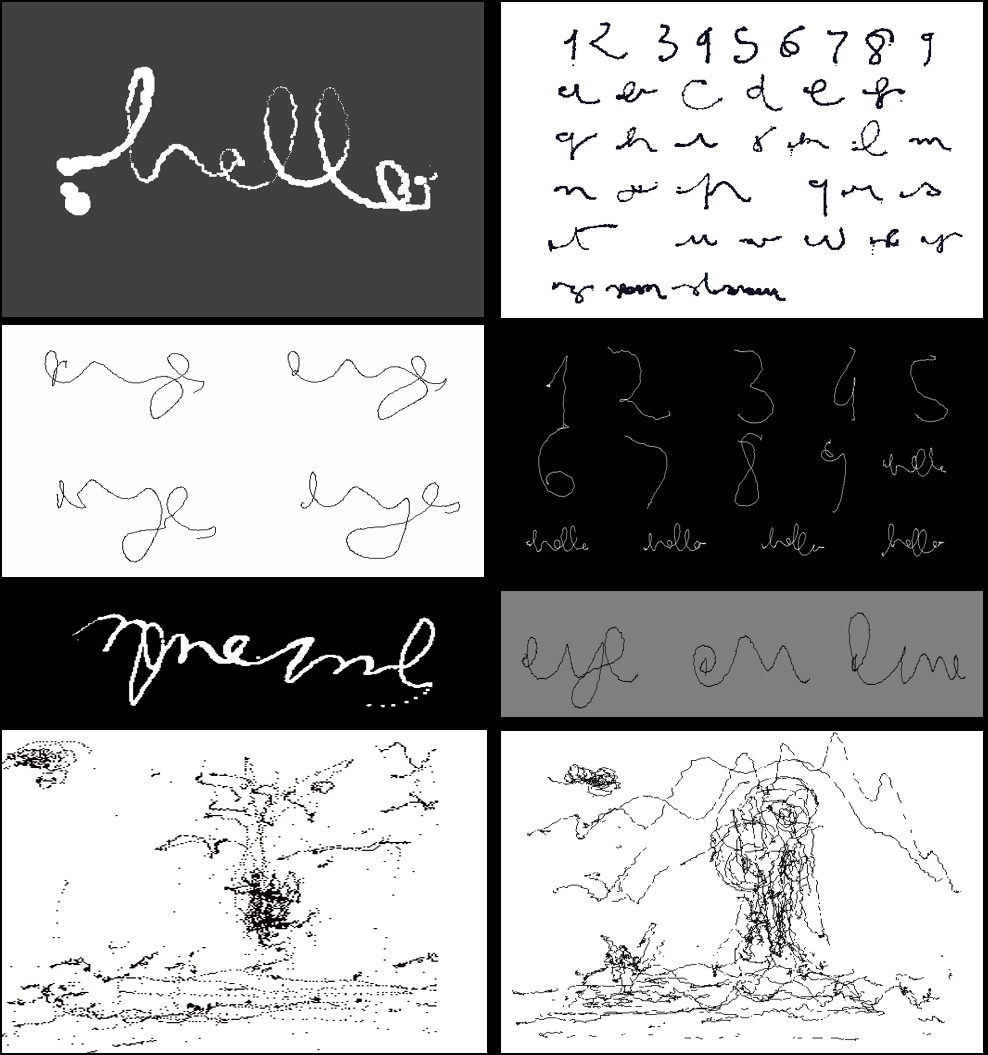 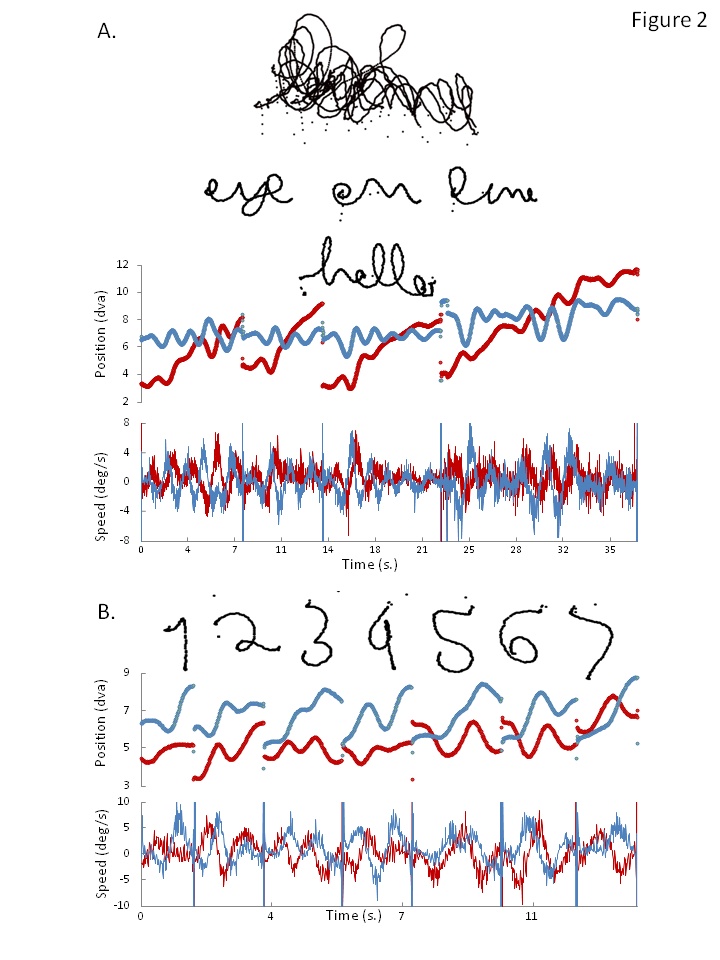 So, let’s see what this stimulus looks like (Activate the loop mode with a right click). It is made of a few hundreds of randomly distributed discs, that are static (always at the same location of the screen) but whose contrast (luminance) alternates between positive (lighter than the background) and negative (darker than the background). If you fixate a single disc, nothing happens. Now, if you let your gaze float around and/or if you move your head but avoid keeping fixation stable, you may start to see « something » moving. This is an illusion of motion, that you should focus on and try to maintain. You would be on a good track! Now you may start to see this « fuzzy motion » that goes with your eyes and/or head movements. If this is the case, you can play with this : move your eyes or head to the right, the whole screen seems to do the same. Try to move to the left, so does the display. If this works, you are ready. With some training you should start to « EyeWrite »…

The movie on the right shows the movements of the eyes during writing (here 1-9 digits + Jean at the end), with smooth eye movements, with blinks used to separate the digits or words. Can you  « decode » the eye movements directly ?

The movie on the left (With eye traces shrinked and processed to suppress blinks ) shows the writing of the alphabet. With training, it becomes possible to write faster and with little fatigue (as it is the case with cursive hand-writing). Below is an on-line example of Digit writing. The yellow dot on the right reproduces the movements of the eyes, that can be recorded and displayed.